Skip to content
Posted on December 12, 2015 by Brad Wiswall

Film is Not Rated. Contains alcohol drinking and scenes of violence (no blood is shown).

Artists are inspired by artists: it’s almost a stated fact at this point. Tarantino was inspired by Sergio Leone, Martin Scorsese and Howard Hawks, resulting in a style that is intrinsically unique, if not over the top. Scorsese himself was inspired by Italian Neorealism directors, as well as Powell and Pressburger, John Cassavettees and Elia Kazan.

Yet, there is one director that even the greatest directors take inspiration from: Orson Welles, Scorsese, Ingmar Bergman, Peter Bogdanovich, Frank Capra, Federico Fillini, Alfred Hitchcock, Kazan, Akira Kurasowa, George Lucas, Steven Spielberg. All of these great directors have one thing in common: they take great inspiration from the filmmaker John Ford.

Ford, who went on to make many films from the silent films to the films in the 70’s, had a distinctive shooting style and way of framing characters and situations.

Quite possibly his most famous and successful film he has made is Stagecoach, the film that made John Wayne a huge star. A film that essentially an ensemble piece set inside confined spaces, featured shot compositions, dolly movements, cinematography and lighting framework that is still used to this day.

So, this film is hugely influential: But is it still a good movie?

A stagecoach heading to Lordsburg, containing several people including a drunken doctor (Mitchell), a sheriff (Churchill) looking to apprehend the Ringo Kid (Wayne) and a prostitute (Trevor), go through various complications, not including a constant threatening attack that is orchestrated by Geronimo. 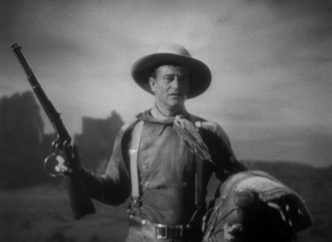 It would be real easy to dive into a review of this film and go over why the film is so important for the medium of film storytelling. Just as a student of filmmaking or lover of the cinematic arts, Stagecoach features several film compositions, types of camera movements, action sequences and uses of indirect storytelling that it’s almost shocking how this type of filmmaking wasn’t copied over several times over before 1950.

But this would ignore what might possibly be a deal breaker for many people: it’s a genre film, after all. And, honestly, people have their opinions on what genres they like and what they don’t. The film is a standard stock old school western: if you’ve seen many of them before, you have seen this film once or twice before. And if you don’t like that, then this may not be a film for you.

Stagecoach wasn’t considered original for it’s time: characters are basic caricatures of different character types: the good-bad guy, the evil banker, the drunken doctor, the whore with a heart of gold: all of these and more are featured prominently in the film. 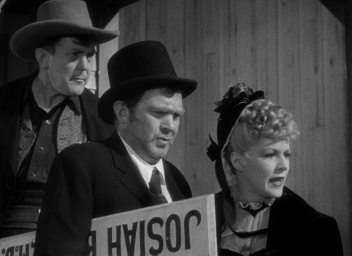 What makes the film different with the caricatures is that they are given room to breathe and how they are visually treated through the lighting and composition.

Basically, if you were never taught basics to filmmaking or don’t understand the way lighting is used to create character and story, it will be like it isn’t even there.

Ford’s use of lighting in key scenes give the movie an artistic quality that very few films have. Pivotal scenes such as Ringo Kid’s introduction, scenes showing Ringo’s desire for Dallas (the prostitute), the realization of a child being born, the fantastic action sequence in this film: they are filmed in ways that are jaw dropping and brandishing a style that very few movies of it’s time ever had.

In fact, no scene in this film is rather simply shot. Looking back at watching the film, there was never a feeling of watching “stock footage” or using dummy locations: no matter what was being shot, it felt fresh and alive in the scenes of the film itself. 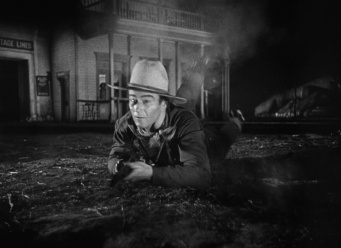 But, again, if you don’t have a keen eye for this stuff, it won’t even matter. I’m not trying to sound elitist, but unless you love westerns, there isn’t much of a movie here for you.

Characters, honestly, are one-dimensional with a slight degree of depth. Yes, you can pick apart what character is who with ease, but they do offer a side-story to be involved in as the film progresses: they are simple side-stories that can be dealt with in two – three scenes flat.

These are likable characters, however: mainly due to the performances of the characters. John Wayne will stand out obviously with his charm and use of facial expressions, but Claire Trevor is truly the best actor in the film with an instantly lovable performance. Her character is the one you enjoy most in the film: she has the most personality and nuance than the rest of the characters, even though they are enjoyable in their own right. 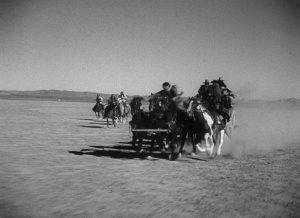 So, where does this leave Stagecoach, exactly?

The film is literally film school wrapped up into an entire film: it shows expert composition with great lighting and camerawork. It’s stunning to see these scenes in high definition and the action scene in the end is breathtaking to watch.

If you are a lover of film and enjoy broadening your palette and watching different types of influences and you haven’t touched John Ford yet, you owe it to yourself to buy this film and watch it several times over. It’s stunning to watch, but it’s also a fascinating deep dive into how storytelling was advanced by this film.

5/5 – For film buffs, it is one of the few films that are considered “Watch Before You Die”. Seriously, get it.

Now, is this a good movie for today’s discerning film audiences? It really depends: It’s not that deep; it’s in a genre that you know you like or not; the characters are like many in the genre. To some, this is where the genre came from, only to be evolved by Sergio Leone and Sam Peckinpah.

It essentially is a great western for western lovers. I can’t really see people who hate westerns liking this movie, but I can see them liking it more than other 5 cent B-movie westerns.

3/5 – For everyone else, it’s got charm and good performances, but it is exactly what you think it is and you know if you like it or not.