Some things are great forever…some have an expiration date. For this fact alone, some “All-Time Greats” need a serious reality check to see if they still stand up or can still be considered great at this present time. Enter “The Wiz Retro Rewind,” where The Wiz re-examines some important and beloved films to see if it’s still good, still relevant or if could be expanded upon or updated.

War movies really are interchangeable. Most war movies use the same types of plot devices, such as a clear good/evil dynamic, a showing of brotherhood in a land so filled with strife and just set piece after set piece of intense firefights, dogfights and naval combat.

Yet, some war movies do different things. Come and See is a harrowing tale of a war being seen by a 13 year old boy. The Thin Red Line weaves a heady, complex narrative amongst the madness of the fight on the Guadalcanal. Patton is more about a specific officer than it is a story about a war. American Sniper has a different light in it that is focuses on the emotional trauma it causes not only the soldier, but the family as well.

And honestly, there are many others to include in that list. But one film has stood out since it’s release in 1979 as being not only an action filled film with spectacular practical set pieces, but also for it’s artistic merit and nearly surrealistic feel.

This movie might just be the most overly shot film ever made, taking 16 months to shoot and having over 200 hours worth of footage and material until it was finally trimmed to 2 hours and 35 minutes in its original cut. 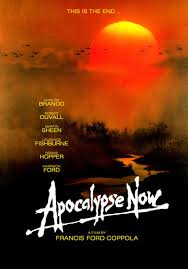 Apocalypse Now is one of the most infamous movies ever made when it comes to the actual production of the film. The lead star, Martin Sheen, had a heart attack in the middle of its production. Sets were destroyed by typhoons. The main billing star, Marlon Brando, came to the set heavily overweight, not reading the script or the book. Drug and alcohol abuse was rampant all over the production, including Laurence Fishburne who got addicted to heroin….when he was 14. One star, Sam Bottoms, was on speed, LSD and marijuana while filming his scenes. Francis Ford Coppola lost an unhealthy amount of weight during the shooting (over 100 lbs) and threatened suicide multiple times during production. An actual buffalo was butchered on set (and is in the final cut of the movie).

All of this stuff has the making of an multi-million dollar disaster waiting to happen.

And yet, even after the long post production (which took 2 years) and rumors of the film being nearly “unwatchable,” Apocalypse Now was considered an unbridled masterpiece by critics and moviegoers in 1979.

To make films with large budgets still have their impact decades later, you need a strong foundation, solid script and a singular vision that coherently sends a message to the viewer of what they are about to watch. Most movies with these large budgets in the past tend to age quicker and lose their impact faster because of the time lapse and the improvement of technology.

Yet, Apocalypse Now is still a beautifully shot, intense, unnerving and fascinating film that shows the darkness of war and the man that soldiers have to be in order to survive. 35 years later, this film still sends chills, horrifies with its disorienting set pieces and makes you think about it’s message long after you’ve first watched it.

This is not just a war movie. It is Homer’s Odyssey transformed into a horrific vision of death, destruction, moral decay and demoralization.

The Places We Go, The People We See

The story is actually simple. Captain Willard (Martin Sheen) has been given a classified assignment to get to Capt. Hurtz (Marlon Brando). Hurts has built himself his own tribal army where he’s worshiped as God. Upon reaching Hurtz he is to “terminate with extreme prejudice”.

In order to get to where he is, he has to travel by boat to Cambodia through the Nung River. This set-up is more like a road movie, where the reaching the destination is where the entertainment comes from.

Well, entertainment is kind of stretching what Apocalypse Now is doing.

You see, although the movie does paint it’s characters in an interesting, almost comical light, all of the characters seem to have the theme of being damaged by the exposure to the war itself.

For example, Capt. Kilgore (Robert DuVall) is completely unfazed when bombs and gunshots are nearby, giving a feel of comedic obliviousness in one light, but also in a disturbed sort of not caring of living or dying.

The film constantly skirts this hard line between comedic undertones of overly exaggerated personalities and harrowing and terrifying depictions of men put into situations where they are incredibly damaged.

Apocalypse Now‘s main plot device, in which Willard and a group of Navy seamen travel the Nung River, becomes the thematic arc of the film, showing these souls who have no idea where they are going and why. This group of characters aren’t particularly deep, but the tonal transformation of the characters from beginning to end gives the movie the heft punch that it brings.

Not only that, the writing is so good in the film that the outside characters provide more character to Capt. Willard, who is depicted as a ne-er do well who is just given a mission and sets out to do it. Also, the character of Hurtz is described effectively without ever seeing the character in person until 20 minutes before the movie ends.

Martin Sheen does an incredible job bringing a stoic, seemingly heartless man seem not only human, but actually likable, without overdrawn monologues or flashy set pieces. His quiet, yet powerful performance does all of the work. Just by facial expressions and exacting precision. The old adage of “it’s doesn’t feel like an actor, it feels like the actual person” is quite present in the movie. 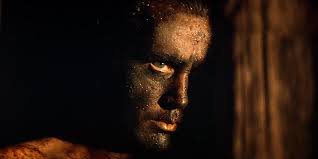 A Prism of War Through Gray Filters

Let’s get to the real star of the movie: the visuals. The colorful, practical beauty that this movie has. From the point of Willard starting his mission, the film has absolutely stunning and jaw dropping set pieces. The action set pieces of the original “Napalm in the morning” scene, with its gorgeous use of explosions and lighting, to the final scenes with its dark temples in burning fire-light and excellent casting of shadows, the film is one of the most beautifully shot films ever put on celluloid.

It’s quite brilliant because nearly every scene in the film is interpretive. You can definitely look at the film without analyzing it and be entertained (if not disturbed) because of how intricate and color rich the scenes are. Yet, there are definite messages being shot on screen for people who want to sink in more to the movie.

From Kilgore’s father-like intentions with his soldiers to the complete mental degradation of one of the seaman on the boat, most can be place there with the simple caveat: “It’s war”. Yet, with different prospectives become different theories.

For example, the USO show, which could have very well been cut from the film entirely to save 15 minutes, but provides another startling message of the effects of war and the less humane most people become in a war zone. The boat being searched? It’s showing the corrupting force of Willard and his intentions, since before they were in the more happy-go-lucky side.

There are a metric ton of things to go into with this film, but again, you don’t have to. It’s still quite a movie to watch without the hidden subtexts.

And the violence, while disturbing at times, is somewhat muted and tone back, which was really surprising. Then again, I haven’t gotten to the ending and since we are there… 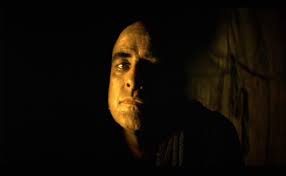 Is This Really The End?

Now, let’s talk about the last 20 minutes of the film, where Willard finally makes it to Hurtz. The film goes from surrealistic, beautiful and raw to…weird, sort of disorienting and tonally off. This starts with the Photojournalist (Dennis Hopper) who spews all sorts of psychobabble talking about Hurtz and his methodology and possible madness.

This character becomes the exact opposite of the rest of the movie. Instead of relying on your own intellect and observations to give you the chance to interpret what’s happening, the character literally is a cliff notes book come to life telling you key points and details, thus kind of ruining the payoff of the destination.

It also doesn’t help that he’s incredibly annoying. But I digress…

The other problem, which pains me to say this, is Marlon Brando. This actor, who is peerless in movies like Streetcar Named Desire, On The Waterfront, Last Tango in Paris, The Godfather…hell, there are plenty of others too. Yet, in this film, he’s just a more muted, yet crazier version of the Photojournalist.

The movie builds up this character as someone who can be many things (including the main character himself), but it doesn’t feel like there was a proper payoff. Or any payoff in fact; the performance of Hurtz doesn’t even really feel connected to the past running time of the film.

Is that a purposely done machination to show what true madness looks like? I really don’t think so, but if it was supposed to be, it failed in a sad way.

Yet, this doesn’t really hurt the film, surprisingly. Because the journey to the destination was so fulfilling in every possible way, it kind of felt like there really was no good way to end the film.

Who Should Watch It

Fans of War movies and spectacular action
Film lovers who like diving into context and more artistic methods
For film lovers, just watching the movie is so damn incredible

Who Shouldn’t Watch It

There are always articles out there of “10 movies you must see before you die!” or something like that, but Apocalypse Now is an ethereal experience that needs to be seen. No real written or spoken “deep dive” of the film does it justice without actually watching the film to comprehend what makes it so exceptional.

This isn’t a typical war movie, but if you are looking for a challenging but fulfilling movie to watch, Apocalypse Now is definitely worth a watch.

Definitely one of my favorite war movies, right next to Overlord and The Thin Red Line.