Welcome to the newest column for The Wiz Says: The Romantic Film Guru

In these columns, The Wiz will revisit some of the best, worst, overrated and under appreciated films with romance, whether it’s a subplot, the whole movie or an aspect of the film.

What this means is the reviews and Tier structure is solely based when looking at in the angle of someone who likes to watch romantic films. Some great films can have terrible romantic subplots, making it a bad movie for romance lovers. Others can be ok or even bad films that actually has a good romantic side to it.

There are tons of romantic films that The Wiz has seen and is dying to show you some of the best around…and of course, some of them that haven’t held together since it’s first release.

In this first column, the film will be discussing a film that was released in 1995. This film is a winner of one Academy Award for Best Screenplay Adapted from a Source Material. It was nominated for six others, including Best Picture, Best Actress and Best Supporting Actress.

The source material is from a beloved author: Jane Austen. Her books have nearly all been adapted to either British TV Miniseries, re-purposed for modern stories or straight up adaptation movies.

And these adaptations aren’t slouches either. Pride and Prejudice, Emma, Persuasion, Mansfield Park, Northanger Abbey. All of them have had excellent actors in the roles: Gwyneth Paltrow, Keira Knightley, Colin Firth, Ciaran Hinds, Felicity Jones, James Purefoy, and Frances O’connor just to name a few.

Yet, there is one film that not only has an outstanding cast, but a sharply adapted script, some of the most gorgeous cinematography in film and some of the best directed scenes in period films.

Sense and Sensibility is considered to be one of the best adapted film ever to be put on celluloid. Unlike most adaptations, very few liberties were made to  the movie when it comes to the novel.

This movie also has some of the best actors at the time: Emma Thompson, Kate Winslet, Hugh Laurie, Imelda Staunton, Hugh Grant and Alan Rickman are just a few of the actors in this film that have gone to do bigger things (such as Harry Potter).

Who is the Film Good For?

Period Costume Drama Lovers – It’s a Jane Austen adaptation, so if you enjoy movies adapted from such writers as William Shakespeare, Charlotte Bronte and Leo Tolstoy, this is right in your wheel house.
You Enjoy “Conversation Movies” – This movie is a very romantic film, but it is all done within the confines of the characters dialogue. Most of the popular romantic films include grand romantic gestures, flash and bombast and, in all honesty, a set in stone formula. While Sense and Sensibility isn’t a movie that will make you rethink the romantic film, it’s a tempered film that when you listen for the layers in the conversations, it’s a wholly fulfilling and enriching romantic experience.
You Enjoy Cinematography – This movie is well shot and lit, giving it an ambience that feels incredibly authentic.

British Voices/Dialogue Isn’t A Problem – If you haven’t guessed by now, every person has an accent and speaks just like they do in the Jane Austen novels. So, if you watch a Shakespeare film or play and say to yourself “Why can’t they just speak English?”, don’t bother.
Unless your favorite actors are Emma Thompson or Kate Winslet, the other actors are merely minor roles – Now I know some of you have looked at the cast and said “Hans Gruber is in this film?! Awesome!” Just hold your horses. Without spoiling the film, the only two actors you see in all of the film is Thompson and Winslet. The rest enter and exit frequently throughout the film. One actor is actually not in the vast majority of the film, but just merely talked about.
You Don’t Watch Films Over Two Hours

When their patriarch dies, the Dashwood ladies, which includes Mr. Dashwood’s second wife (Gemma Jones) and her daughters Elainor (Emma Thompson), Marianne (Kate Winslet) and Margaret (Emilie Francois), are forced to leave their home with only a small amount of inheritance. They move into their kindly (and crazy) Cousin John Middleton and his mother Mrs. Jennings. While they cope with the lost of their patriarch, they try to adjust to poorer living while finding love with different suitors. 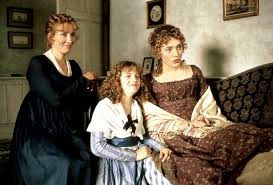 Taking away the comparisons to the book, Sense and Sensibility is the purest form of cinematic romanticism. The film, one of the best adaptations of any Jane Austen story, is a film that is whimsical as it is wordy; has a strong fantasy feel while being firmly grounded in its Georgian English Society background. Yet, even compared to it’s modern adaptations (most recently Scents and Sensibility and From Prada to Nada), the film adaptation directed by Ang Lee is still far and above one of the best romantic films ever made.

Many film adaptations of Austen, Shakespeare, Bronte and even Charles Dickens feel the need to create an elaborate set piece to basically instruct the viewer that this is a key scene. Whether it shows a lavish ball filled with eccentric characters and costumes, an intense scene of violence or an over bloated scene of significance, lots of different adaptations as far back as the 50’s still have the need to leave more than obvious clues that “SOMETHING IS GOING TO HAPPEN HERE!” because they feel the audience can’t discern the language the characters are speaking in the film. 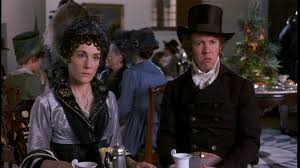 The highlight of the film is the screenplay, which was adapted by Emma Thompson. Each scene is excellent written while letting any viewer discern what is going on without pandering. A great film can make even the most difficult to explain contents and make it watchable and enjoyable, Thompson’s screenplay does just that for the setting.

The screenplay let’s the words do all the action, while still feeling romanticized to a point to give it that warm feeling. What Sense and Sensibility does is take the characters, make them identifiable instantly, which let’s you enjoy these characters almost instantly with its well crafted screenplay. The introduction to each character, while seemingly simplistic, is ultimately to set up the crafted plot through its delicate dialogue and its intriguing look into romance in Georgian society.

In many scenes, the film breathes the life that it has while still being authentic to the source material. What that means to people who haven’t read the book: the movie has a great feel that straddles a precarious line that many upon many of films fail.

Next, all of the actors are excellent, especially Emma Thompson, Kate Winslet and, which was most surprising, Alan Rickman. Emma Thompson has a great quiet performance as Elainor, which is usually a hard character to really get right due to a lot of her emotions are merely being stoic and reserved. Thompson gives Elainor a certain heart that only the best of actors can make out of a character who is merely devoid of emotion. 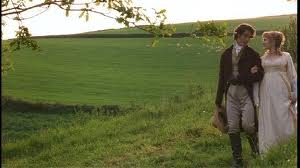 Kate Winslet gives her usual energetic performance, like she always does in film like Iris, Titanic, Eternal Sunshine of the Spotless Mind. The character is built for Winslet’s strengths: she’s energetic, outwardly emotional and has the more of the traditional romantic scenes you would see in the film.

The best performance goes to Alan Rickman, who usually does his best performances as dryly comic and droll then wide eyed and romantic. His performance as Colonel Brandon is one of the best performances from a male actor in any romance, including Casablanca and It Happened One Night. You feel every moment of his emotions in the film so well, whether he’s heartbroken or overjoyed. Rickman’s performance is easily the most likable and the one that most will identify and bond with most.

Finally, the direction of the film is excellent. Ang Lee’s use of camera work, along with the excellent shot composition by cinematographer Michael Coulter, gives the movie exquisite yet realistic color and definition. The interiors of the film look great when convey the differences of lifestyle the sisters have and the grandness of the emotion in the scene without being overtly obvious.

The direction doesn’t have a distinctive visual style because it really shouldn’t: like mentioned above, the script is the real highlight of the film. That said, Ang Lee’s direction only helps to bring the screenplay out even more than in most movies. It’s unfair to call it minimal, but it’s more utilitarian in the best way.

Sense and Sensibility is one of the best movies, romantic and otherwise, ever made. It’s main performances are excellent, especially Alan Rickman, and it’s delicate use of dialogue helps in all aspects of the film, whether it’s comedic or romantic. It’s a film that is easily recommended for everyone, including those who don’t like period piece movies.

Unlike my other reviews on this site, putting a score to these reviews seem to feel odd than in a straight review of a film and all of it’s aspects. With that, a tiered system will be used to show what are the best and worst romantic films of all time. This tier list is meant to change, so if this film loses its luster even though it is still great 20 years later, it will change with an explanation as to why.

Tier 1 – Best Romantic Films Ever Made  – Casablanca, It Happened One Night, Sense and Sensibility, Before Sunset, The American President, Chasing Amy, Shakespeare in Love

Tier 3 – Decent Romantic Films – As Good As It Gets, Midnight in Paris, Secretary, The Curious Case of Benjamin Button, Crouching Tiger, Hidden Dragon, Scott Pilgrim vs. The World, There’s Something About Mary, About Time, Hitch,  High Fidelity, The 40 Year Old Virgin, (500) Days of Summer, Walk the Line, Brokeback Mountain

I hope you enjoy this new style of review of using on my site. I will go over some of the film in the tier list now in the future, but I will focus on adding to the list more than explaining the list (unless there’s a suggestion for a rewatch, which is always an option).