This movie is very similar in a way to a movie called Copland. In it, Sylvester Stallone played a toned down, low key version of what he usually plays in film.

Maggie has that same kind of “gimmick,” where it has Schwarzenegger playing a grieving, brooding dad. In fact, the film and his performance is very quiet and moody compared to other roles he’s been in.

The only thing with Copland was that Stallone was good in the movie, but the movie itself wasn’t very good. How does Maggie turn out?

Wade (Schwarzenegger) is a farmer from the mid-west in the near future who finds out that his daughter Maggie (Breslin) has been infected by a zombie. With the infection, Maggie has a number of days before she goes through full transformation, so she needs to be quarantined from the rest of the population. This film explores the problems Wade and Maggie go through before the eventual. 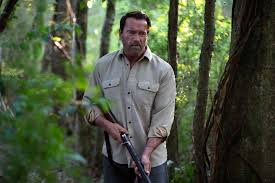 Let’s get this part out-of-the-way: Arnold Schwarzenegger has a good performance in a role that is meant for more quiet, pensive intensity. He carries himself quite well, he’s able to bring pathos to a character that many have never seen him do before. As a performance piece to show Arnold is more than just guns, muscles and one-liners, Maggie shows that.

The actual movie, however, has some key problems, but they are bolstered not by Schwarzenegger’s good performance, but an excellent performance by Abigail Breslin. The rest of the movie is a decent change in the usual zombie flick that does a good job with giving an authentic setting. The problem is one key element and unfortunately, it’s a big problem.

The two lead actors are great, especially in scenes where they are together. Schwarzenegger and Breslin have a great chemistry that is great to watch through, especially during the end of the movie when the plot wheels start to turn more. There is a chemistry that the two actors have that is key to the enjoyability of the film, since the other actors, including Joely Richardson, are just mere window dressing in comparison.

Breslin is excellent in this film, so much so that she greatly outshines Schwarzenegger as being the revelatory factor in this film. Yes, she’s done good jobs in other movies before, but this has shown another side of the actress that hasn’t been shown: a hardened, more tested and convicted performance.

She plays the character quite well as a self-aware, but not overly dramatic portrayal, which for young actresses is hard to actually compound. The fact that Breslin’s performance is both “damsel-in-distress” and “hard-nosed, down to earth young woman” is hard to teeter, but she not only does it, she far outsizes her role.

So, if this is a performance piece that has two good performances and it has a good atmosphere that feels authentic, what could possibly be the problem with this movie?

The main problem is Schwarzenegger, who despite putting in a good, quiet performance, his mere presence clashes with the rest of the film. You set your movie in the mid-west or a breadbasket state area. You have a supporting cast, including the main actress, who feels authentic and that they belong in the place the film is.

There even seems to be small details in the film that show a modicum of love that was put into the town. The look, pace, feel and tone of the film feel incredibly authentic and has a different take on what has become a quite stale type of horror storytelling.

Then, Schwarzenegger comes in and makes you realize “Oh wait, there’s no way that guy is a farmer and lives in the breadbasket state”. This isn’t necessarily the fault of Schwarzenegger, since his role isn’t much of a speaking role as it is an emotive role, but he clashes so much with the surroundings that it becomes a big distraction.

Big enough that it takes you right out of the film. There is no possible way to believe without some sort of convoluted back story that a man who looks and sounds like Schwarzenegger belongs in this place that has been created for the film.

Now, odds are this film would have not been made if it weren’t for Schwarzenegger or had the publicity it had, but it still doesn’t shake the fact that this film is miscast in its most crucial place: lead actor.

Which is a shame, because Schwarzenegger’s performance is one of the best in his career and it has be excited on what he might go and do next with this type of role under his belt. The huge distraction is not of the fault of Schwarzenegger and his performance, it’s just that he is not a good fit aesthetically for the area the movie is set in.

It might seem nit-picky, but it’s like having a really good steak and someone top the steak off with tofu, cinnamon and whipped cream. Sure, the steak is absolutely amazing, but you ruined it by putting in something that doesn’t belong. 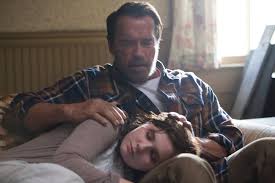 Maggie is a tough movie to “review”, but there is no doubt that this is a movie that should be watched who like horror movies and Schwarzenegger. Schwarzenegger gives a good performance, while Breslin steals the movie with an excellent performance.

But you have to do an awful lot of “cinematic turn-off” to wrap around the casting of Schwarzenegger, which is just a shame, because this film is such a well made movie that the right actor would have made Maggie a classic.

But for now, it’s a curious oddity of what could have been.

3/5 – Breslin is excellent, Schwarzenegger is good, despite him being poorly casted for the role.