On this segment, The Wiz will choose a movie or TV Show for you to stream on any and all streaming services. That’s right, that’s Netflix, Hulu, Crunchyroll, Crackle, HBO Now…whatever is good!

Mind you, titles on any of these services could leave at any time, so be mindful of the date of this post and that all titles are subject to change.

Featuring Jennifer Aniston’s best performance to date, Cake has Aniston playing a woman who is living with chronic pain issues. Embittered and rotten, Aniston suddenly becomes infatuated with the suicide of one of her support group members (played by Anna Kendrick) and seeks to figure out why she killed herself the way she did.

Cake is something you have probably never seen Aniston do well: play a deeply flawed, pretty unlikable person. Even though she remains sympathetic due to her condition, the character is not one that will be likable for some, but will definitely help you to understand the plight of someone who has chronic pain problems.

Cake is streaming on Netflix starting June 1st, so definitely give it a look.

Galavant is a show that I never really thought would ever be made, especially on network television. A romantic fairy-tale musical parody show? John Stamos on TV again?

But Galavant is one of the most charming and hilarious shows to come out this year, with its catchy music and it’s hilarious take on fairy tale stories, only with a more adult twist.

The lead actor, Joshua Sasse, is great in the role as Galavant, but the show stealer is Timothy Odmundson (formerly of Psych) that plays the cowardly and dim-witted King Richard, gives the show a strange charm.

The series is completely streaming on Hulu and it’s only 8 episodes of 22 minutes each, so even if you are only passively interested, it’s worth a shot.

The Fog of War: Eleven Lessons from the Life of Robert S. McNamara – On Crackle

Crackle is a service that most people often ignore, because they really don’t know what it is. Basically, it’s a free streaming service that’s on most consoles, PCs, tablets and phones.

One movie Crackle has that deserves a watch is one of the best documentaries made in the past twenty years: The Fog of War, which is directed by Errol Morris, who did The Unknown Known and The Thin Blue Line.

The film is about Former Secretary of Defense Robert S. McNamara, who served under Presidents Kennedy and Lyndon Johnson. He discusses everything from the time period all the way to the mistakes he made as Defense Secretary.

It’s a fascinating portrait of one man’s mark on the United States that should be seen by any documentary lover. 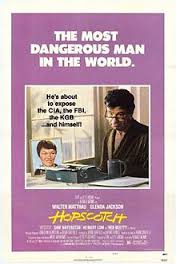 Hopscotch, a movie from 1980 about a CIA operative who decides to write a tell-all book in this farcical comedy, is one of Walter Matheau’s little known, but hilarious, gems.

Not as madcap as It’s A Mad Mad Mad World, but has some good action as well as some good spy games type internal, Hopscotch is a movie that blends a lot of what spy movies do nowadays into a funny, charming comedy.

That’s it for this first edition of Hey Wiz, Whatcha Streamin’? Have any suggestions to watch that you feel should be on here? Leave a comment below and let me know!