Skip to content
Posted on April 2, 2015 by Brad Wiswall 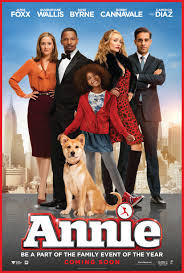 Starring: Jamie Foxx, Quvenzhane Wallis, Rose Bryne, Bobby Cannavale, Cameron Diaz
Adapted from the play by Thomas Meehan, which is adapted from the comic strip “Little Orphan Annie” created by Harold Gray
Written for the screen by: Will Gluck and Aline Brosh McKenna
Directed by: Will Gluck
Metacritic Score: 33
IMDb Score: 5.1
Nominated for 2 Golden Globes, including Best Song “Opportunity” by Sia, Will Gluck and Greg Kurstin and Best Actress in a Comedy/Musical (Quvenzhane Wallis).

Rated PG for some mild language and rude humor

Remakes generally get a bad rap mainly because they are remade to tell the same exact story the previous did, only to do it in a lesser way. Sure, there are some that work splendidly (True Grit, The Departed), but there are also many that just don’t work (Diabolique, The Vanishing, Insomnia). When Annie was announced with an african american actress playing the titular main character….well, it was getting great buzz (mainly because it was a starring vehicle for Willow Smith at the time).

And, let’s be honest, the original Annie from 1982 doesn’t hold up well at all. In fact, it’s downright terrible. So why subject myself to the remake of a movie that outright couldn’t stand? A few reasons: painful lack of self-worth, the need to constantly punish myself and…well, I’m a fan of musicals.

I really bet you are dying to know what I think of this film, don’t you?

Annie (Wallis) is a child in foster care being taken care of by the alcoholic Miss Hannigan (Diaz), who believes that her parents will one day come back for her. Will Stacks (Foxx) is the president of a mobile phone conglomerate who is looking to run for Mayor. After him saving Annie from getting hit by a car, his advisor Guy (Cannavale) suggests to take in Annie to help his numbers. Little did he know that he would grow to become attached to little orphan Annie. 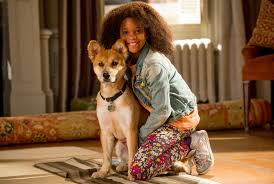 I’ll note again that I do not like the original Annie in any way shape or form, so take this next statement with whatever grain of salt you need to.

Annie is a surprisingly light, fluffy good time that has more energy than even the most excitable musicals. In fact, ti’s downright infectious. The film makes no bones about what it is: it’s a silly, child like look at finding someone to care about you and as long as you can be swept into it, Annie will give you a good time.

Mind you, some of the worst aspects of this movie is when it makes call backs or straight up remakes of old tent pole songs (the “Hard Knock Life”, in particular, is pretty bad), but when Annie decides to put its own spin on the source material, it does a fairly good job to the task.

The key ingredient to everything good to the movie is the young actress Quvenzhane Wallis. Her performance is one of the best performances by the child in quite a while. She has an effervescent quality that brings a special kind of spark to the character. She is easily the best part of the movie and worth watching just to see her energetic and adorable performance.

The main adults in the film, which are Jamie Foxx, Rose Byrne and Bobby Cannavale, are also very charismatic in the movie as well, with Bryne having the best performance out of the three. Foxx seems completely in his element here: being able to show is singing and dancing skills while having a weird charm. Cannavale, who plays the heartless villain in the movie, does a commendable and often funny performance.

Yet it’s Rose Byrne, who plays the lovable assistant to Foxx’s Stacks, is the adult who shines the most in the movie. Along with her dance numbers, Byrne has a lovable quality that makes her a joy to watch on-screen, especially during scenes with Wallis. Rose Byrne is an actress that has shown considerable range in the past few years and I’m hoping to see more from her real soon. 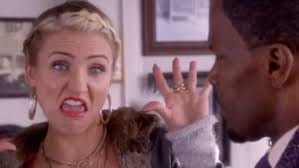 The rest of the performances are not nearly as good, particularly Cameron Diaz. Her performance as Miss Hannigan is highly annoying and completely over the top in the worst way possible, which was also a quality the character had in the original Annie. Diaz’s character is mainly used as a joke for kids (and adults, I guess) to make fun of how out of touch she is to today’s youth, which it does well with one big problem: making references to Hootie and the Blowfish and C&C Music Factory won’t do anything for either kids or adults.

So, with this being a musical and all, it’s important for the film to be good on the music side. This is where the film really has an identity problem.

When the movie tries to stay “true to its roots” as an Annie remake, in any capacity, it comes off as unnecessary and terribly dated. As mentioned before, “Hard Knock Life” just doesn’t fit well with the film nor does any scene that serves as a throwback to the original.

Basically, the first half hour was the hardest to watch, since it seems to be truest to the original. When it gets to the Will Stacks/Annie dynamic is when the film decides to put its own spin on the source material, almost to the point where it’s a different movie all together. 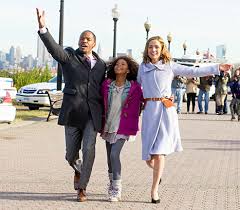 This gives me one crucial question, which is something that’s asked before I even decided to watch this film: Why remake Annie? What makes Annie such an important film to kids and adults today that demanded a remake? The original movie is horribly dated, to the point of being unwatchable; a lot of the things in the movie is much more sensitive now than it was back then (such as rampant child abuse).

Hell, you can literally take the best part of the film, suck out anything Annie, and create a film entirely on that and you’d still have a good movie. It’s almost hilarious that the thing people were uneasy about in this film is not only underserved in this movie, it’s completely superfluous to the totality of the film. You can literally take “Tomorrow” and “It’s a Hard Knock Life” out of the film and put anything else in there and you wouldn’t bat an eye lash.

Yet, many people will not watch this movie because of the fact that it is being labeled as a remake of Annie, which as a pure remake, is terrible. It doesn’t hit the same notes nor does it really have the theatrics that the original did.

But, people are quick to coin this as a “ghetto Annie” or an “Annie for the rap generation” which is completely false. This movie is something entirely different from the original, while being cute, funny and charming all on its own. I’ll say this, the fact that the main actors are played by African-Americans are not even a thought that comes into the movie. 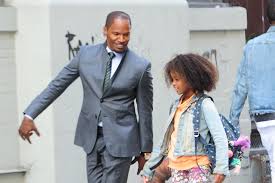 The point is that the film stands out on his own without it clinging to the original source material. If you have an opinion on the original Annie, I would still say to give this movie a shot. Quvenzhane Wallis is the highlight of this film, while the more principal actors hold up on their own. The movie is a highly energetic, funny and bubbly movie that just wants to make you smile. And it did.

3/5 – Wallis is exceptional, principal cast is good; Everything Annie is throwaway